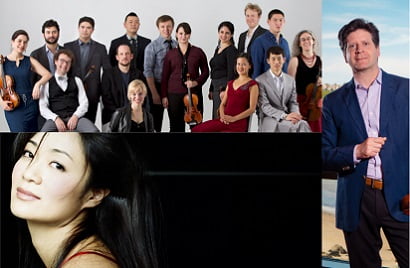 The Grammy-nominated A Far Cry, a self-conducted orchestra, stands at the forefront of an exciting new generation in classical music. In addition to the Criers serving as Chamber Orchestra in Residence at the Gardner Museum, the Criers were named by The New Yorker as one of the “Imagination-Grabbing, Trailblazing Artists of 2014.”

A Far Cry was founded in 2007 by a tightly-knit collective of 17 young professional musicians, developing an innovative process where decisions are made collectively and leadership rotates among the “Criers.” For each piece, a group of principals is elected by the members, and these five musicians guide the rehearsal process and shape the interpretation. Since each program includes multiple works, this multiplicity of leaders adds tremendous musical variety to the concerts.  A Far Cry’s omnivorous approach has led the group to collaborations with artists such as Yo-Yo Ma, Jake Shimabukuro, Urbanity Dance, and Roomful of Teeth. By expanding the boundaries of orchestral repertoire and experimenting with the way music is prepared, performed, and experienced, A Far Cry has been embraced throughout the world with hundreds of performances across the globe. In October 2014, A Far Cry launched its in-house label, Crier Records, with the album Dreams and Prayers, which received critical acclaim and a GRAMMY nomination. The second release, Law of Mosaics, followed in 2014 and has also garnered much critical attention, including many 2014 Top-10 lists.  Collaborating with local students through an educational partnership with the New England Conservatory, A Far Cry aims to pass on the spirit of collaboratively-empowered music to the next generation.

Since her first public performance at age 8 in her native Seoul, violinist Chee-Yun has enraptured audiences on five continents with her flawless technique, dazzling tone and compelling artistry. Since winning the Young Concert Artists International Auditions in 1989 and the Avery Fisher Career Grant in 1990, she has performed regularly with the world’s foremost orchestras, including the Philadelphia Orchestra and the London Philharmonic. Her orchestral highlights include a concert with the Seoul Philharmonic conducted by Myung-Whun Chung that was broadcast on national network television, a benefit for UNESCO with the Orchestra of St. Lukes at Avery Fisher Hall, and her tours of the United States with the San Francisco Symphony and Japan with the NHK Symphony. In 2016, Chee-Yun performed as a guest artist for the Secretary General at the United Nations in celebration of Korea’s National Foundation Day and the 25th Anniversary of South Korea joining the UN. Firmly committed to chamber music, Chee-Yun’s seven discs on the Denon label and one on the Naxos label have received exceptional acclaim, and she has been heard frequently on NPR’s Performance Today. Chee-Yun plays the 1669 Francesco Rugeri violin which she has owned since 1991.

Artistic director of the Rockport Chamber Music Festival and classical music at Rockport Music, internationally acclaimed violinist and violist Barry Shiffman is well-respected as a musician, educator and administrator. He was co-founder of the St. Lawrence String Quartet, and currently serves as both the Associate Dean and Director of Chamber Music at the Glenn Gould School and Dean of the Phil and Eli Taylor Performance Academy for Young Artists at The Royal Conservatory of Music in Toronto. During his 17 years with the SLSQ he appeared in over 2,000 concerts in venues around the globe, and recorded several critically acclaimed discs under an exclusive contract with EMI Classics. While in SLSQ, Shiffman served as artist-in-residence at Stanford University from 1998 to 2006 and as visiting artist at the University of Toronto from 1995 to 2006.

He has also served in numerous roles at the Banff Centre, including Director of Music Programs (2006-2010), Artistic Director of the Centre’s Summer Music Programs (2010-2016), and Executive Director of the Banff International String Quartet Competition, which he continues to direct.  During his tenure at The Banff Centre he introduced new programming in classical music performance, composition, popular music and jazz and oversaw the dramatic growth of The Banff International String Quartet Competition (BISQC), which he continues to direct.  Recipient of the Longy School’s Nadia Boulanger Prize for Excellence in the Art of Teaching, he received his formal studies at the Royal Conservatory in Toronto, University of Toronto, Utrecht Conservatory, Hartt School of Music, Juilliard School and Yale University.