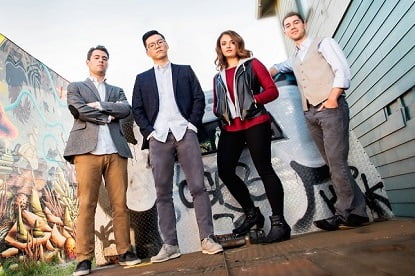 The Dover Quartet, winner of the 2013 Banff Competition and Cleveland Quartet Award and first ever quartet-in-residence at the Kennedy Center, is considered “the young American string quartet of the moment” (The New Yorker). The Dover catapulted to international stardom following a stunning sweep of the 2013 Banff Competition. Recently named the Cleveland Quartet Award winner, and awarded the coveted Avery Fisher Career Grant, the Dover has become one of the most in-demand ensembles in the world. The Quartet’s rise from up-and-coming young ensemble to occupying a spot at the top of their field has been “practically meteoric” (Strings).  The Quartet serves as the quartet-in-residence for the Bienen School of Music at Northwestern University, Chamber Music Northwest, as well as many others, and was recently named the first-ever quartet-in-residence for the Kennedy Center. Additionally, during this past season, the Quartet was invited by the maverick filmmaker David Lynch to be featured at his Los Angeles Festival of Disruption.