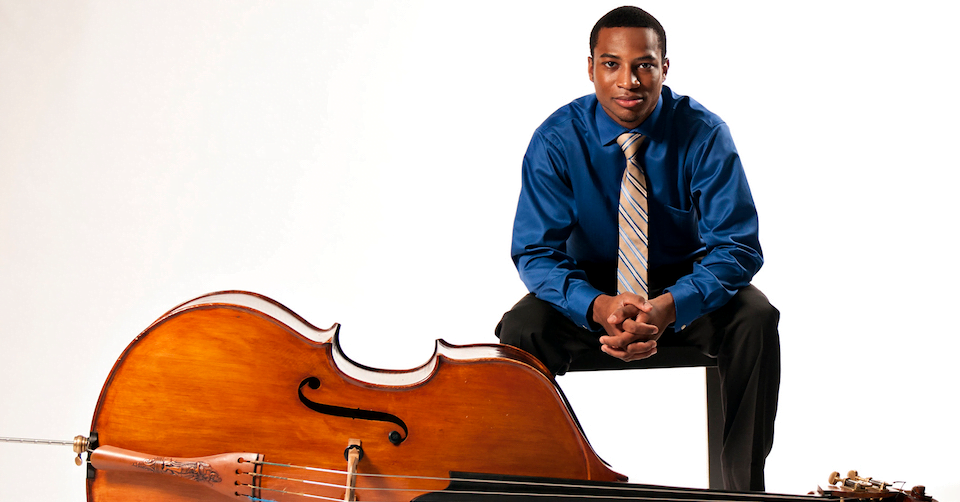 The dynamic and thrilling bassist Xavier Foley performs Bach’s Cello Suite No. 1, as well as a series of original works. Winner of the 2016 Young Concert Artists Competition and the 2014 Sphinx Competition, Foley was hailed by The Philadelphia Inquirer as “… a standout player….a musician who hears borders between styles as limitation best ignored.”

First Prize winner of the 2014 Sphinx Competition, the 2016 Young Concert Artists Auditions, and a winner of the 2014 Astral Artists National Auditions, bassist Xavier Foley has appeared as soloist with the Sphinx and Atlanta symphony orchestras, Philadelphia Orchestra, and the Nashville Symphony. He made his Carnegie Hall solo debut with the Sphinx Virtuosi, with which he was also soloist on East and West coast tours. Also a composer, he is a 2016 graduate of the Curtis Institute of Music, where he studied both composition and performance with Edgar Meyer and Hal Robinson. Xavier Foley strives to become a world artist on the double bass as he continues to incorporate all styles of music, whether it be cultural, national, or folk music. ARTIST’S WEBSITE

“…The bass plays many roles – singer, near comic, supporting actor, star – and Foley used them all.”— The Inquirer