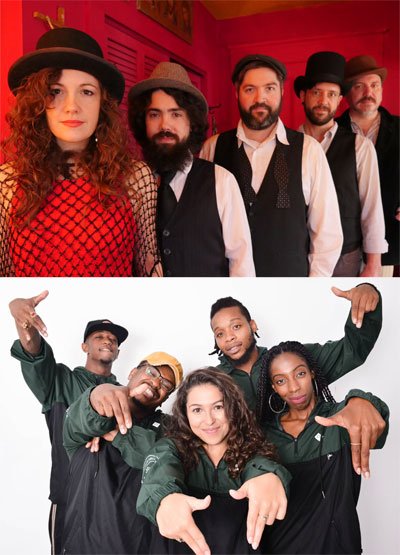 Enjoy a preview of this year’s New Year’s Eve celebration on the outdoor stage at the Windhover Center for the Performing Arts! What Time Is It, Mr. Fox? is a veteran RNYE musical favorite, and Trend N Motion is an exciting hip-hop dance group that will be making their first RNYE appearance.

Named after a Victorian children’s game, What Time Is It, Mr. Fox? can time-travel from 1960s New Orleans soul back to the minstrels of Medieval France before landing in the Tin Pan Alley era of NYC.  Led by the gender-defying voice of 3rian King, the ensemble delivers its own brand of smoky cabaret, neo-soul and acoustic noir, sounding something like Tom Waits and Amy Winehouse performing in a French cafe. What Time Is It, Mr. Fox? is known for its original songs which marry rich lyrical imagery with a cinematic sensibility, exploring themes of love, spirituality, sexuality, and identity.  Mr. Fox brings honesty, energy, and emotional authenticity to every performance.

Trend N Motion is a Boston based dance group that creates productions throughout New England for various events. A diverse team that genuinely loves expressive movement Trend N Motion spreads the spirit of dance to the young and old; highlighting the therapy of expression. They have performed for the Apollo Theatre, the Museum of Fine Arts, the Museum of Science, and many more community events.