A Walking Guide of Rockport, MA

WALK ONE -The Headlands and Old Garden Path.
From Dock Square, proceed up Mount Pleasant Street, passing T-Wharf with its view of Motif#1 on your left. You will soon pass the Hannah Jumper House, a small white house with blue shutters just before turning left onto Atlantic Avenue. While strolling up this Avenue, pause for scenic views of the Rockport Harbor and the Yacht Club. Straight ahead, enter a paved path called “Way to Headlands”. Hannah Jumper House: This white house with its blue shutters was the home of Hannah Jumper, who led the women of Rockport in the famous Hatchet Gang Raid of July 8th, 1856. Subsequently, Rockport became a dry town, and remained so until 2005, when voters approved the sale of alcoholic beverages in local restaurants. Headlands: A Rocky outcrop offering spectacular views of the harbor and the town. This is a famous place for artists and a great spot for a picnic at sunset or for viewing sailboat races on weekend afternoons. Leave the Headlands out the back side onto Old Garden Road; continue several hundred yards to Old Garden Beach. Old Garden path is accessed from the beach when sandy by going up the wooden stairs on the rock wall to the right of the beach. If not easily accessible walk past the beach and onto the foot path between the second and third house on the left, this will bring you between the private homeowners’ land and the ocean along a short 1/2 mile seaside walk to Marmion Way. At this point you can turn right to South Street and follow the sidewalk back to town. For an extended walk turn left onto Marmion Way and meander through this neighborhood of oceanfront homes, B & B’s, and gracious Inns with beautiful flowering gardens. At the intersection of Marmion Way and South, turn right and follow sidewalk back into town.

WALK TWO- Bearskin Neck
Stroll from Dock Square, to Bearskin Neck, with its many colorful shops, restaurants, and art galleries. Explore Bradley Wharf and Tuna Wharf, the first and second rights along your way. Proceed to the end of the Neck for a panoramic view of the Atlantic Ocean and the breakwater. Return to Dock Square via Doyle’s Cove Road and either Middle Road or North Road. At the end of North Road, take a right on Old Harbor Road to Sea Fencibles Park and White Wharf for a view of the Old Harbor. 20 minute walk, or if you shop? Bradley Wharf: The former site of a schooner boat building yard. Throughout its history, the wharf has been used primarily by fishermen. Motif #1 is located on Bradley Wharf. Motif #1: The ultimate artist’s subject of the New England coast. This humble fishing shack was built in 1884. Artists began painting this shack in the mid-19th century and was it dubbed Motif #1 by Lester Hornby. In 1945 it was purchased by the town as a monument to Rockporters in the armed services. In 1978 a blizzard destroyed the Motif but the town rebuilt it. The distinctive red paint was no longer available so a new formula was developed to replicate the character of the building. In 1992 a series of storms weakened Bradley Wharf and Motif #1 was moved back so the granite pier could be repaired. Whenever you paint or photograph Motif #1 you are honoring the spirit of Rockport. Tuna Wharf: Built in 1884 for the landing and processing of cod fish. Around 1950, large catches of tuna fish were being landed, which gave the wharf its present name. Sandy Bay Breakwater: Visible from the end of Bearskin Neck and 1.5 miles out to sea. This partially completed breakwater was an unsuccessful attempt by the Government in 1885 to make Rockport a major Atlantic shipping port.

WALK THREE – Main St. Beach St. and Millbrook Meadow
From Dock Square walking up Main Street stop for a visit to Lumber Wharf on your right. You will pass the Rockport Art Association and the Congregational Church on your left, followed by the new Shalin Liu Performance Center on your right. Take a right onto Beach Street, passing Front Beach and then Back Beach, crossing the street to the Bandstand. Return on Beach Street and take a right on King Street. Proceed past five houses on left to a set of granite stairs. Cross over the footbridge and enjoy your time in Millbrook Meadow, Upper Pond, and the Old Burial Grounds and follow the gravel footpath onto Beach Street and return to Main Street. To extend walk to Historical Society, exit Meadow and walk further up King Street to the Sandy Bay Historical Society. Follow Railroad Ave. to Five Corners, and then return to Dock Square via Main Street or Broadway. Old Sloop Congregational Church: (1803) During the War of 1812, a British frigate in the harbor fired at and missed the bell (which had been rung to alarm the town). The shot landed in the tower support instead, and, if you look closely, can still be seen! Old Tavern Building: (now the Rockport Art Association & Museum, since 1929) Built before 1787, this building has served the town as a residence, an inn, and restaurant terminus for the Rockport/Salem stagecoach run. Shalin Liu Performance Center: Rockport’s intimate 330-seat oceanside music hall, opened in 2010, is a center for cultural events year round. Specially designed for chamber music, the Shalin Liu offers audiences superb acoustics, clear sightlines, and a close connection to performers. A floor-to-ceiling glass window serves as the stage’s backdrop, with magnificent views of the ocean and Rockport’s coastline. Millbrook Meadow: A lovely green park with specimen trees, shrubs, and plants, a granite keystone bridge, and granite stairs in memory of the quarry workers. There was once a pump organ factory, and even a grist mill in the Meadow. There are two ponds to sit and relax by and a small playground for the children. Historical Society: This Granite building erected in the mid-1800s by a quarry owner features a beautiful center stairway, original pump organ from Rockport, historic artifacts and a “must see” kitchen!

WALK FOUR – Dogtown Common Walk via Summit Avenue
From the parking lot at the top of Summit Ave, go through the white gate and follow the trail through the Forest for 1/2 mile until you reach a T-Junction at which you turn left. The trail narrows; take the left fork after about 400 yards and the right fork after crossing the brook. After about 500 yards you reach a dike at trail marker #14. Either cross over the dike, or take the boardwalk to the right to join Luce Trail at Marker #15. Turn right on Luce Trail for about 300 yards to trail marker #16. Turn right over the stream and after 100 yards reach marker #17 at the Whale’s Jaw. Continue on the main trail, still Luce Trail, from Whale’s Jaw for another 1/3 mile or so until you reach the junction at marker #18. Stay right and look out for a trail after about 100 yards that heads into the woods to the right; it’s narrow but it’s marked with a painted rock at the intersection and then paint blazes on the trees. After about 600 yards, this trail meets the T-junction 1/2 mile from the start. Take the left here to walk back to the parking. A little over two miles or about 1 hour of walking. The Dike: Built in 1930 to prevent the red water of Briar Swamp permeating the Babson Reservoir which serves as the main water supply for Gloucester. The Boardwalk: Built by the Essex County Greenbelt Association and the Dogtown Advisory Committee in 1987. It provides a rare chance to walk through a wooded swamp. Whale’s Jaw: A huge split granite boulder that used to look like a humpback whale rearing out of the ocean with its mouth agape. It has inspired many artists including Marsden Hartley (1877-1943). Unfortunately in 1989, allegedly after a fire was lit under it, the lower jaw broke free and now lies on the ground. Dogtown: Turning left at marker #15 leads after a mile (including a left turn at marker #5) to the center of Dogtown (at marker #7). Built in the 1600s and abandoned by the 1830s, it is one of America’s oldest ghost towns.

WALK FIVE – The Atlantic Path
A two mile walk or drive from the Village Center out Granite Street, past many historic homes and ocean views. Turn right at Phillips to Cathedral Avenue. The Atlantic path begins at a break in the wall on the left side of the street, just past the Emerson Inn. You will want to consider proper walking shoes as the Atlantic Path takes you over rocks that slope down to the ocean as well as dirt foot paths. Follow the marked trail and enjoy the awesome vistas. If driving be aware that parking is very limited in this neighborhood, and you may need to park and walk to the entrance. So watch the parking signs carefully; we don’t want you to get ticketed and towed.

WALK SIX – Halibut Point State Park
Just 2 1/2 miles from the Village Center out Granite Street to Gott Avenue, the Park lies at the northernmost tip of Rockport and has an expansive view of the Eastern seaboard. On a clear day you can look across Ipswich Bay and up the coast to NH and Maine. The Park is a paradise to many, from the casual walker and historian to the avid birder. Self guided walking tours of the granite quarry are available; be sure to stay on the marked trails. Parking is available in a lot on Gott Avenue; parking fee may apply.

WALK SEVEN – To Cape Hedge and Long Beach
Take a beautiful walk along Mt. Pleasant and South Streets Historic District, past some of Rockport oldest homes and B and B’s. Cape Hedge Beach is just a 2 1/2 mile walk, at the end of South Street. Stroll across the beach and over the stone sea wall to the foot bridge which will gain you access to Long Beach. A few parking spaces are available between Camborne Way and Penzance Way. Fifty minute walk to the beaches, Cape Hedge Beach is 1/2 mile long, Long Beach extends 3/4 mile. 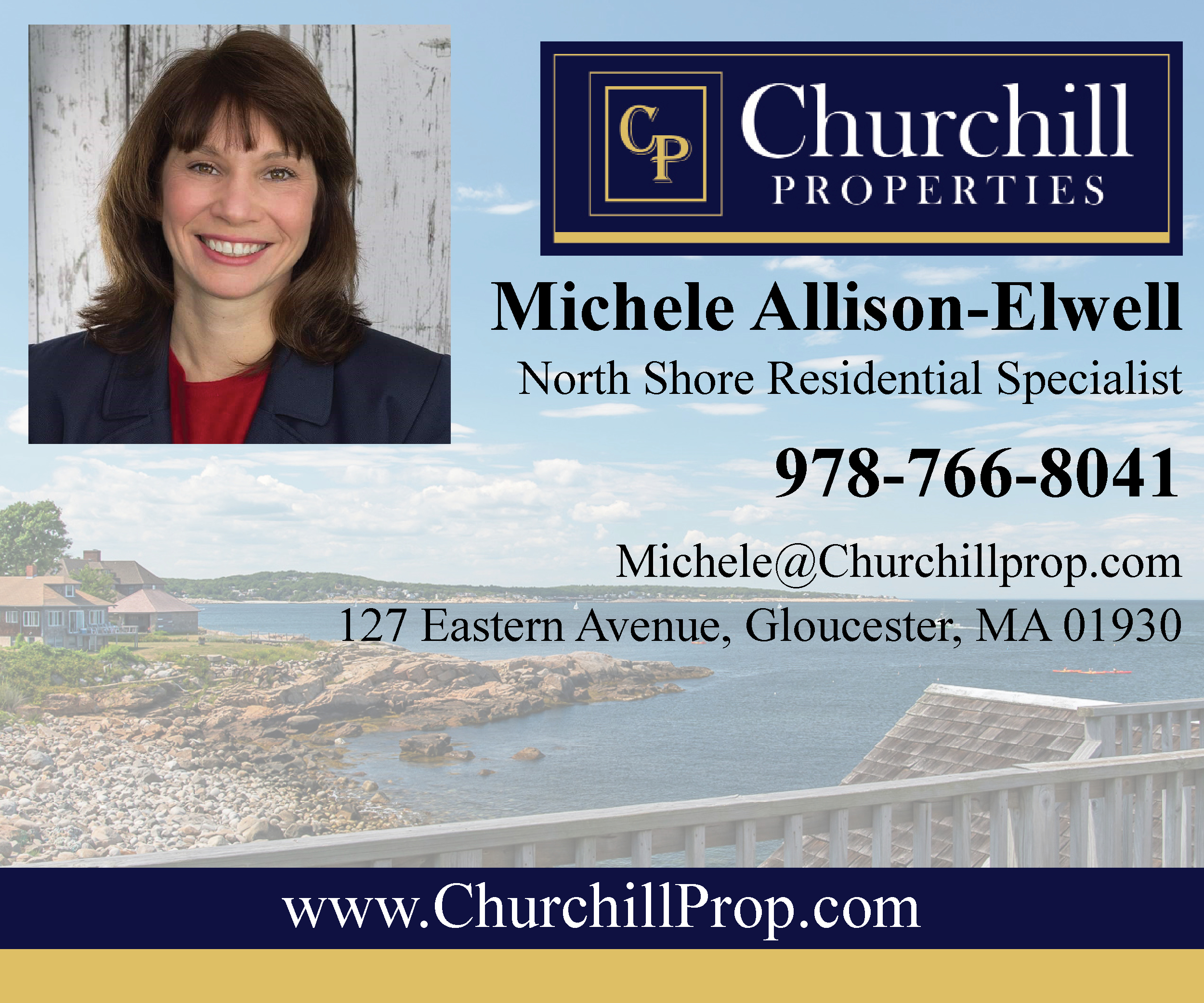